It’s tech week for Hamlet and the company are in the theatre bringing everything together from rehearsals and planning into what you will finally see on stage. With previews starting this Thu 11 February – and as ever in tech week – there’s lots to do! It’s a wonderful time to be in the building watching everybody busying around.

Jane Curnow, Hamlet‘s Wardrobe Supervisor is next up to blog for us and she has some fascinating insights.

“We are now in tech week and we’ve moved into the actors dressing room and are just setting up. We have hired the majority of costumes from Bristol Costume Services, and borrowed some items from the University and Bristol Old Vic Theatre School. We have also made Hamlet (Alan Mahon), Laertes (Callum McIntyre), Ophelia (Isabella Marshall) and Gertrude’s (Julia Hills) costumes. They have been created by different people, and I myself have made Gertrude’s which I have almost finished putting together, so that is exciting.

The process for costume is that on day one, the Designer Max Johns comes with all his designs, and the items we can’t find from the hire departments, we make. We did a lot of fabric sourcing to try and get exactly the right sort of fabrics, because there is a lot of black in the show and they have to be quite precise. We found samples from fabric stores and online, and Max went to London to find some very beautiful velvet for Gertrude’s over cloak.

The period is 1600 just as the play would originally have been set, with lots of ruffs and big skirts.

For Ophelia’s dress, she has a beautiful fabric that is almost watery. It has a lot of silver and gold with a touch of blue running through it, which could be a watery theme taking you back to the script and her drowning. It is a classic square necked flat fronted bodice, with a lovely ruff stand collar that nobody has seen yet!

The biggest challenge was the budget as this is a huge show. We have 15 actors and there were about 35 costumes I had to source which we couldn’t financially manage. So we have had to be imaginative with some things, and make the important decision to create certain costumes.

The next process for the actors is to try their costumes on again during rehearsals to see if there will be any wardrobe issues during their performance. For example, they might need extra pockets, or can’t climb certain set pieces because their skirts are too long. Anything can arise. Jess who is the Wardrobe Mistress will be there to help actors who are in one scene and then need to change out of their costume quickly to be in the next scene. This quick change might impact on what we need to do to the costume to make it easier to get in and out of fast. So there are still lots of things that need to happen, and people will need extra items that maybe haven’t come up in rehearsals – suddenly we could find they’re stood on stage with no clothes on!

There are some absolutely stunning costumes and it is going to look fantastic, so we are very excited!” 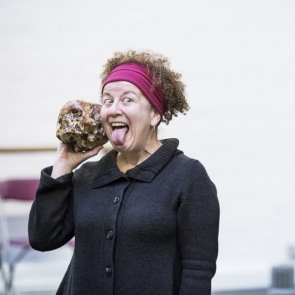