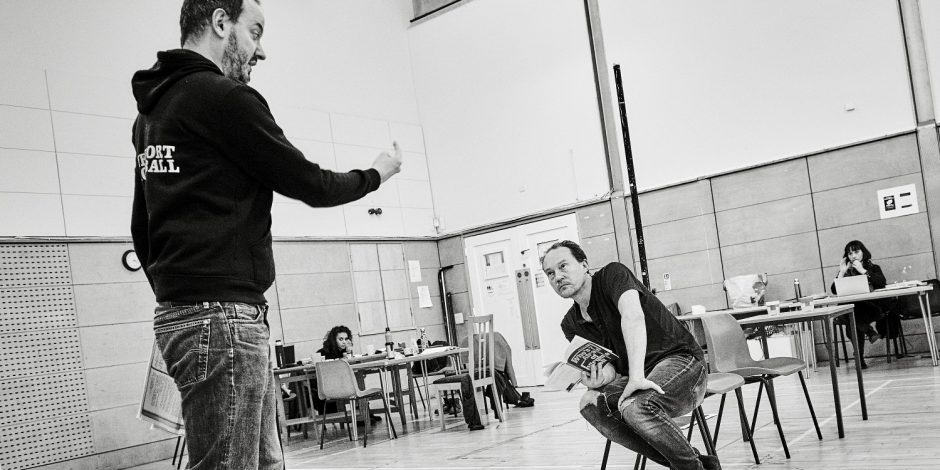 My name is Lucie Morgado and I’m a third year “Theatre and Performance Studies” student at the University of Bristol, currently here at Tobacco Factory Theatres on a marketing placement. A large part of my role here is shadowing and assisting the wonderful team of marketing professionals within the theatre; planning marketing campaigns, looking at what attracts audiences and aiming to get as many people to see the shows as possible. However I’ve also recently been lucky enough to get spend some time in the rehearsal room for the upcoming co-production of Who’s Afraid of Virginia Woolf?, Edward Albee’s famously seductive black comedy.

I attended the whole creative team’s initial read through of the play and then more recently a day of filming for the production’s trailer. What initially struck me as crazy upon stepping back into the rehearsal room was how much progress had been made in only the week between these two sessions, reiterating just how slick and efficient the turnaround for professional productions like these have to be. The caffeine fuelled rehearsal room was already alive with acting brilliance, intriguing director’s notes and a hint of the American dream. My main focus for this second day was observing videographer, Cam, in her filming, set up and interview process designed to create beautiful marketing content for the production. I was able to gain insight into what such a task entails; learning about the effects of different camera angles, ways to prompt actors into getting the type of responses you want out of them and deciding upon details as small as which interview backdrop appears most aesthetically pleasing.

I was given the opportunity to ask the actors a few of my own questions at the end of each interview which gave particular insight into why it might be particularly important for a younger student audience to come and see this specific production at this specific point in time. Firstly, Who’s Afraid of Virginia Woolf? is one of the great classics; not to be missed by any ardent theatre goer. But secondly, and more importantly, the play speaks to a modern audience because it is arguably a critique on American society in the 60s, highlighting issues that seem to have transcended time and still hold resonance for current audiences here in the UK. The conflict of the main couple mirrors that of the tumultuous political climate of post WW11 America. It highlights the difficulty in merging the ideas of older and younger generations and touches upon the power struggle between men and women both in and outside of the workplace; issues that are still very much relevant to British society at present.

For me, this is a pivotal point in my professional life where interning and observing others in practice will prove to be invaluable experience, and already my time at Tobacco Factory Theatres has been hugely educational in guiding me towards my own place within the arts industry. The biggest thing I’ve learnt here so far is that theatre is very much a collaborative effort and when executed well can be a powerful tool for social change. And of course that you don’t want to miss this show; it’s going to quite literally pack a punch.