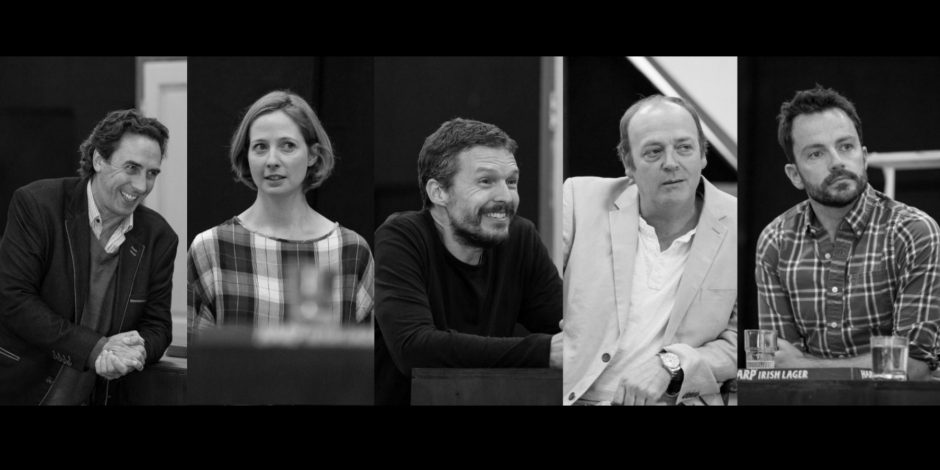 The Weir: Cast and Creative Team

Tobacco Factory Theatres and the Sherman Theatre are delighted to be embarking on a new co-producing partnership and are thrilled to make the link between their two organisations as they expand their individual in-house production portfolios. They come together for this production of Conor McPherson’s The Weir, which plays at Sherman Theatre from Fri 07 – Sat 22 October and at Tobacco Factory Theatres from Tue 25 October – Sat 05 November.

The cast of The Weir includes Steven Elliott, Richard Clements, Orla Fitzgerald, Simon Wolfe and Patrick Moy. Directed by Rachel O’Riordan, the show is a brand new co-production between the Sherman Theatre and Tobacco Factory Theatres.

Set in a remote bar in rural Ireland, four friends and one stranger find solace in sharing stories ranging from the heart-warmingly humorous to the darkly confessional. A renowned contemporary classic, The Weir is a multi-award winning play, including the Laurence Olivier Award for Best New Play of 1997-98 as well as McPherson’s Critics’ Circle Award and Evening Standard Award for most promising playwright in 1998.

Richard Clements (Jim) has made numerous stage and screen appearances, including regularly appearing on BBC’s The Fall in the role of Rick Turner. His onstage performances include the Edinburgh Fringe First award winning Spoiling in 2014. He has worked with Rachel O’Riordan on several past productions including Over the Bridge and Arguments for Terrorism. He trained at the Royal Welsh College of Music and Drama.

Steven Elliott (Finbar) has most recently appeared in numerous productions with Theatr Clwyd, where he is also an associate artist, including Jumpy and Cyrano De Bergerac. His onstage appearances also include the National Theatre’s Frankenstein and The Winter’s Tale.

Orla Fitzgerald (Valerie) is an Irish stage actress now based in London. She was nominated for Best Supporting Actress and Best Breakthrough Artist at the Irish Film and Television Awards for Ken Loach’s Palme d’Or award winning The Wind That Shakes the Barley as well as being nominated for Best Actress for the Irish Times Irish Theatre Awards. Most recently, she played the role of Winnie Carley in Fishamble’s Inside the GPO. Her other onstage appearances include: The Comedy of Errors (Royal Exchange Theatre), Out of Joint’s BANG BANG BANG and Uncle Vanya (Lyric Belfast).

Patrick Moy (Brendan) is an Irish actor, nominated for the Ian Charleson Award for his role as Malcolm in Macbeth at Edinburgh’s Royal Lyceum Theatre. He also provides the voice for Pickle on CBeebies’ Footy Pups. He has previously worked with companies including the Royal Shakespeare Company and has recently completed a US tour of A Midsummer Night’s Dream with Actors From the London Stage.

Simon Wolfe (Jack) has appeared recently in War Horse at the New London Theatre; Orpheus Descending at Royal Exchange, Manchester and Punk Rock at the Lyric Hammersmith, Royal Exchange. He has previously played the role of Brendan in the Royal Court’s tour of The Weir 15 years ago in 2001.

Rachel O’Riordan, Artistic Director of Sherman Theatre, has received widespread critical acclaim for her recent productions of Bird and Iphigenia in Splott. Rachel continues to direct a classic annually at the Sherman and The Weir follows A Doll’s House in 2015 and Romeo and Juliet in 2014.

For a full break down of roles please see the main show page for The Weir.