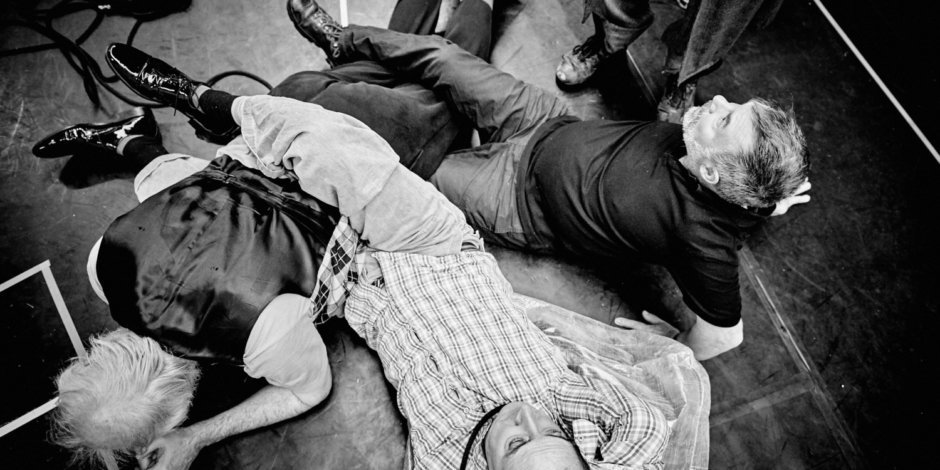 Waiting for Godot – The Golden Week

As rehearsals for Waiting for Godot progress, Assistant Director Chloe Masterton reflects on the latest stage in the process.

Week Two in the rehearsal process is the Golden Week. Familiarity has been established – with the play and with each other – and we’ve developed a shared language with which to approach the text. Opening night is still enough of a distant figure on the horizon to prevent panic about ‘getting it right’: there is still time to play. And if we were more or less a bunch of strangers on day one, we’re now a newly hatched family having bonded over the common struggle of deciphering Beckett’s text.

Having said that, we’re already moving quite fast. Four weeks is not a long time to get to grips with a full-length play, particularly when the text is as dense and, at times, unfathomable as Beckett’s. Often the first week or two of a rehearsal process are spent sitting round a table, pulling the play apart, but we got up on our feet pretty smartish. People are often misled by the frequently quoted line: ‘Nothing happens, nobody comes. It’s awful.’ In fact, there is a great deal of physical action in Waiting for Godot and the more you see the characters moving around, the more the words make sense. Beckett’s stage directions create a physical score that must be learnt just as carefully as any line of text. Pozzo and Lucky in particular have a rather complex set of moves involving a stool, a basket, a coat and a whip!

Mark’s approach to rehearsing is very detailed. We’ll often busk our way through a section to get a sense for the staging and the overall arc but then we’ll start from the top, combing our way through bit by bit. We might try out different intentions or raise the stakes for a character in some way. Mark is very keen that the actors find the truth of what the characters are experiencing and if they are genuinely invested in the hope and fear of the situation; the comedy lifts off the page and tragedy comes into sharp focus.

Now that our Golden Week has ended we venture into week three with some excitement and trepidation. There are still fight sequences to master, lines to drill, and the majority of Act Two still to explore.

Many thanks to Chloe for her insights into the rehearsal process. Chloe Masterton is a Leverhulme Arts Scholar and recipient of a JMK regional bursary funded by the Leverhulme Trust Arts Scholarships Fund.