THE STRANGER ON THE BRIDGE: Jonny Benjamin’s life changing story

Written by Katie Hims from the true-life experiences of Jonny Benjamin, The Stranger on the Bridge is a moving portrayal of one man’s determination to find the Good Samaritan who changed his life. On a cold January morning in 2008, 21-year-old Jonny Benjamin went to Waterloo Bridge to take his life. Balanced on the edge of the railings, a stranger stopped and talked him out of jumping in: an act of kindness that was to change both their lives forever.

The Stranger on the Bridge is a poignant account of what led Jonny to the bridge that day – and the astonishing events six years later when he decided to track down and thank the Good Samaritan. He eventually found his saviour, Neil Laybourn, six years later after millions of people shared his story online and the hashtag #FindMike (Jonny had never found out the stranger’s name, so called him ‘Mike’ in the interim) went viral.

We talked with Jonny about the events leading up to, and since, that seminal moment in his life. 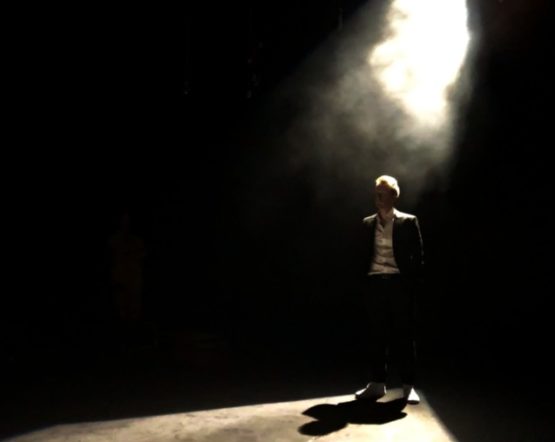 Do you think you are now in a better place than you were back in January 2008?
Much better. I still struggle with my mental health at times and encounter relapses (my last stay in hospital was only five months ago), but I will talk about it now and ask for help when I need it.

And how much have Neil’s intervention, and your quest to find him, and the public support that elicited, played a part in this?
Both have played a huge part in my recovery. I felt very lost and isolated when I was really struggling with my mental health. I was so scared about being judged. But Neil’s compassion on the bridge, and the public’s kindness since I started sharing my story, have helped me onwards on my journey more than words can express.

Was there one single thing that Neil said to you that day that helped in particular? Or was it the whole fact of his talking the time to talk to you?
It was Neil’s calm, grounded presence that helped at first. I was in a state of despair on that bridge but there was something about his gentle demeanour that eventually began to impact on me.

The way he listened was also incredibly important. He was so patient and empathetic. I hadn’t been listened to like that before. But ultimately it was the words he said to me which changed my mind about what I intended to do that day. He kept reassuring me with the words “you will get better mate.”

Having lost all faith in myself, I finally began to let the words of this stranger into my consciousness. Subsequently he convinced me to come off the edge of the bridge and have a coffee with him. We never got the chance to, however, as the police intervened as soon as I stepped off the ledge.

What would you like audiences to take away from the show – both those with mental health difficulties of their own, and others?
Ultimately I want people to take away the message that there is hope, even in the face of an adversity such as experiencing a mental health issue.

We’re living in a challenging and uncertain climate, and there is a lot of disconnection and discontent within our society.

I believe the play is a remedy to this. It reminds us of the goodness within our humanity. Neil restored my faith in humankind with his actions that day on the bridge and I truly hope the play will be able to restore other people’s faith if they may have lost theirs.

Catch The Stranger on the Bridge at Tobacco Factory Theatres from Tue 14 until Sat 18 May in the Factory Theatre. To find out more and book, visit the main show page.

POST SHOW TALK Please join us after the performance on Tue 14 May for a free post show discussion with Jonny Benjamin and the creative team.