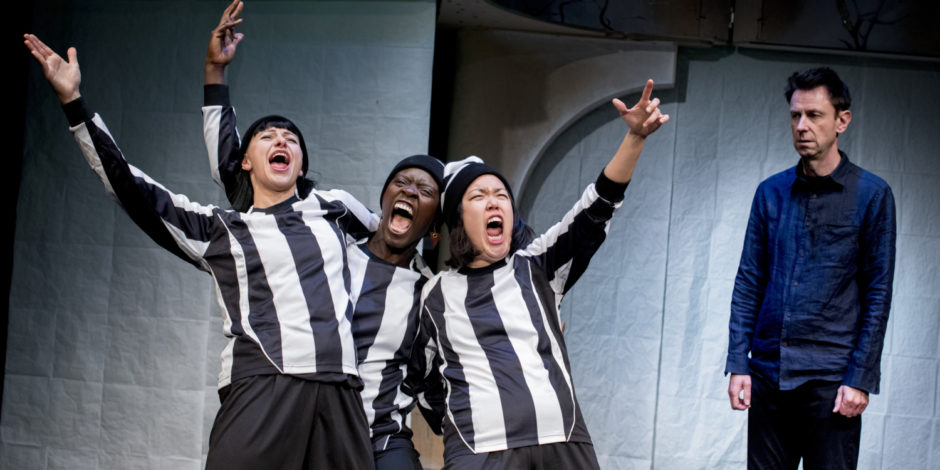 Opening at Tobacco Factory Theatres on January 24, Improbable’s The Paper Man is an intriguing true story of political protest, power and football.

In 1938, Austrian football star Matthias Sindelar humiliated the Nazi regime by refusing to throw a match. A few months later he was dead. Accident, suicide or execution? Inspirational little guy, or yet another man and his ego? Who cares?

Middle aged, white British, football addict-in-recovery and director of Improbable Lee Simpson wants answers. He hires some women to make a show about football, Nazis, and our future. In a paper world of light and shadow, violence and dance, five performers work together on what sets them apart, under the direction of Bristol-based Tanuja Amarasuriya.

Here’s Tanuja to tell us more.

How does it feel bringing The Paper Man to Bristol?
I’m excited because it’s my hometown, which also makes me a little nervous, because we’ve had very little time to bring this version of the show together… but that tight time frame gives everything an electric energy and I’ve totally fallen in love with the show over that time. I’m really fascinated to hear how people respond.

Tell us what we can expect from The Paper Man.
On the one hand it’s the story of Matthias Sindelar, the brilliant Austrian footballer who defied the Nazis – and at the same time it explodes right through that legend to expose how histories get written and what happens when people who don’t usually get to choose and tell stories are invited to bring what really matters now, to the fore. It’s a show about football and Nazis. With dancing. It’s a show about how we get to know different people. It’s very funny, and also serious. Did I mention the dancing? 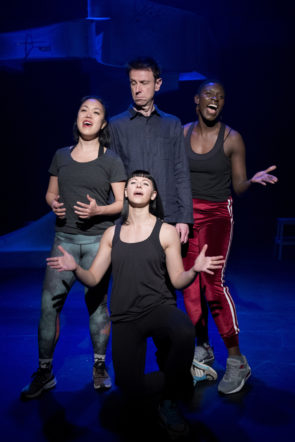 How do you want audiences to feel having watched the show?
I think it’s a really alive show, and I’d love for people to come away from it feeling exhilarated and alive to other people. It’s amazing what becomes possible when you bring different people, with different lives and perspectives together, without trying to erase that difference. All kinds of crazy stuff can emerge, and surprising – often really hopeful – possibilities. 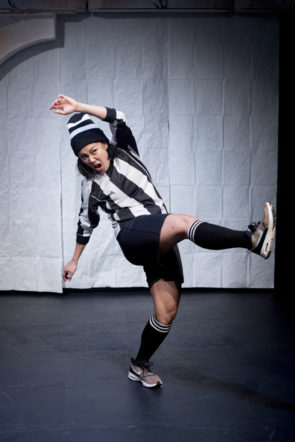 Describe the creative process in the rehearsal room.
I usually work from a script and it’s my vision of how we’re going to tell the story that leads the room. The process on The Paper Man has been completely different, because it’s so fundamentally about the people on stage being present and commenting on the story we’re telling. It’s properly collaborative right through its bones. I remember saying to Improbable, when they first asked me if I might be interested in directing: “You know I’m not a devising director, right? I work with scripts!” What I realised, though, is that it doesn’t matter too much that I don’t know anything about improvising or clowning, because everyone else in the room is super-skilled in those areas.

Because it’s such a personal show for the company, it’s been really important for me to understand how the original show was developed; the emotions and politics behind that material. It’s been a fascinating and, of course, challenging process to work out how we knit all that together. But I can honestly say, these guys are some of the funniest, sharpest, cleverest collaborators I’ve ever worked with. My jaw has dropped so many times at stuff that comes up in the rehearsal room. There’s a lot of laughter. Also, loud music.

Catch The Paper Man at Tobacco Factory Theatres this Thu 24 until Sun 27 January in the Factory Theatre. To find out more and book, visit the main show page.

POST SHOW TALK Please join us after the performance on Fri 25 January for a free post show discussion.