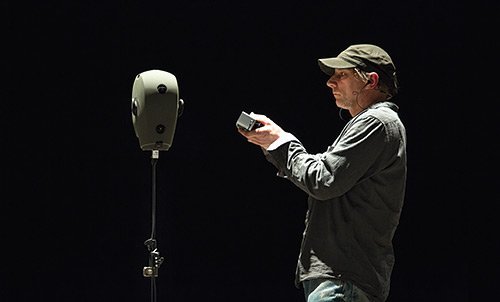 When we watched Complicite’s The Encounter at Bristol Old Vic last year we were dumbfounded – it’s not only a spectacular feat of performance but uses astounding state of the art technology. It’s quite an experience.

Complicite are keen that as many people get to experience The Encounter as possible and so this March, they’re working with different organisations around the country to live stream a theatrical performance from The Barbican, London, on their own websites and websites like our own.

We’re really pleased to be working with them on this and will be broadcasting the live stream on this page.

So on Tue 01 March, all you need to do to live stream Complicite’s The Encounter is visit this page and play the film below, which you can enlarge in your screen or watch through You Tube by using the usual controls below.

The live stream will begin at 7.30pm.

You must wear headphones to watch the live stream, or the effect of the binaural recording will be lost. Any headphones will work, but playing the film out of speakers will not give the same effect.

The live stream is free to watch, and will also be available to watch on demand for a week after the live broadcast.

The Encounter tells the story of National Geographic photographer Loren McIntyre who, in 1969, became lost in a remote part of the Brazilian rainforest while searching for the Mayoruna people. His encounter was to test his perception of the world, bringing the limits of human consciousness into startling focus.

Threading scenes of his own life with details of McIntyre’s journey, Simon McBurney incorporates objects and sound effects into this solo performance to evoke the depths of the Amazon rainforest. The show’s
ground-breaking binaural sound design (3D audio) by Olivier Award Winner, Gareth Fry, is transmitted to the audience through headphones and plugs into the power of the imagination, questioning our perceptions of time and our own consciousness.

Future dates for The Encounter