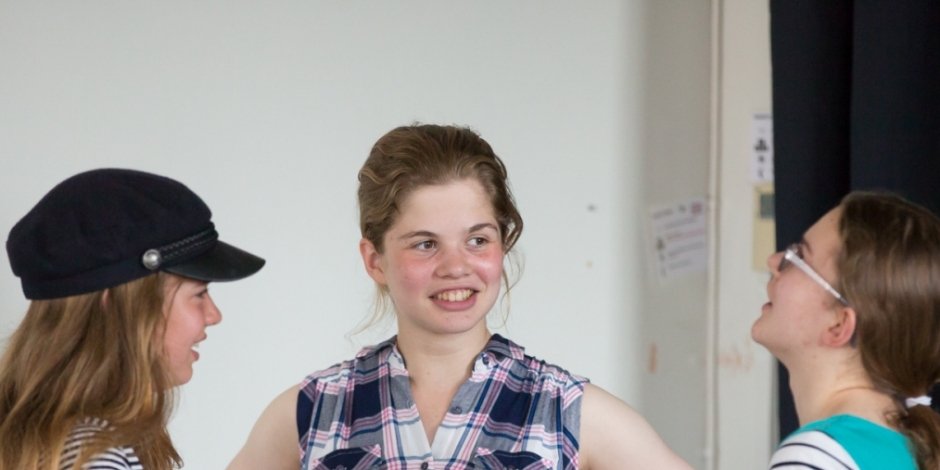 A Sting in the Tale blog by Sophie Greenwood

As our Young Theatre Makers prepare for A Sting in the Tale, two new shows inspired by the magical and often malevolent world of fairytales, YTM member Sophie Greenwood shares her thoughts on the process so far.

“Several weeks ago, YTM 14:19 sat down as a group and began brainstorming. We wrote down all the different fairy tales we could think of, with no limitations on what to include. By the end of the activity we’d come up with more than thirty different stories total. The list was placed in the middle of the floor as a reference point, and we all got up on our feet to start exploring how we could use all these ideas to create our own performance.

One of the first things we began doing was questioning the events of the various stories. We would walk around the room in pairs, one of us telling the story and the other questioning the narrative as it went along. The narrator would invent responses as they thought of them, deviating as far from the original stories as they liked and often getting wilder and more imaginative as their explanations for various plot twists were questioned again and again. This helped us invent and expand on our own ideas connected to particular stories.

Another activity we used at the start of the process was soundscapes. We worked as a group to create what we thought was the atmosphere of a particular place or situation, using sound. We could then use this to work out what we wanted the feel of our performance to be.

We also began telling the stories in our own ways. One example of this was when we created a series of still images, focusing on what we thought were the key moments of the story and how we interpreted them. Our images were often very abstract, which meant that they encouraged us to be creative in what we came up with rather than just going for the obvious or literal idea.

One thing that almost all these activities had in common was use of improvisation. We’d go into what we were doing with almost no forethought, making up and working with ideas as they came to us. This meant that the twists we invented were strange and unpredictable from the start. But having decided we could work with this, the next thing to think about was how to weave them all together in one performance.

Through discussion we narrowed down the fairy tales we were including. We also decided that which of our ideas we could make best use of to turn the stories into something creative and original. Then we worked our way to where we are now.

At the moment we’re working on putting our performance together. This involves script-writing, costume and set design, playing and composing music, directing and more. These are skills quite apart from performing, and since many of us haven’t explored them much before, the whole process feels very new and exciting.

Importantly, I feel that I have learned about the dramatic potential in all these different stories, and how directors and companies might use this potential to create a performance. I’ve learned about all the different skills needed for this process, and why it’s so challenging in several ways, but in the end so worthwhile.”

Find out more about A Sting in the Tale on the main show page.