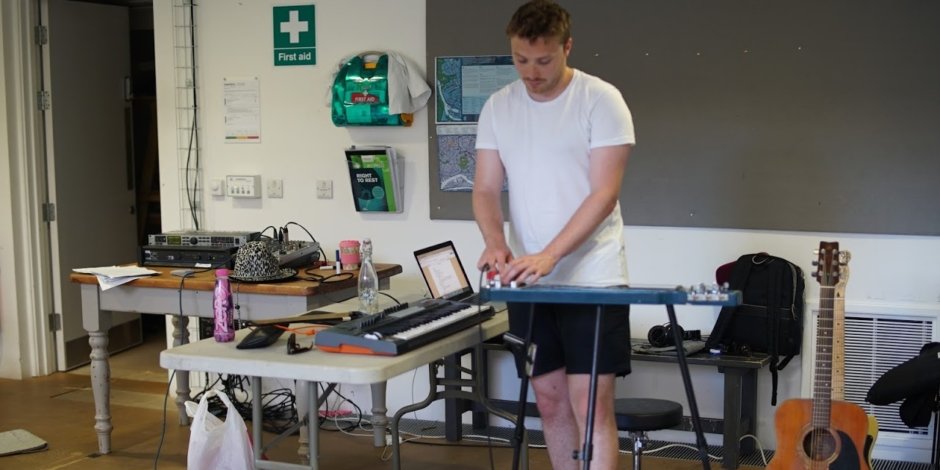 Making the Music of South Western

Tom Crosley-Thorne is the composer of the music for South Western, the brand new show from the Wardrobe Ensemble which premieres at Tobacco Factory Theatres later this month. Here, Tom talks about the instruments used in his music and the inspiration behind them. Over to Tom…

I’m an associate artist of The Wardrobe Ensemble and I wrote and performed the music for previous shows from the company, including 1972: The Future of Sex and Wind in the Willows.

I’ve spent the past two weeks in my usual ‘music corner’ surrounded by instruments, well mostly guitars actually, in all different shapes and sizes. From lap steel to mandolins, acoustics to electrics, I’ve been playing with every sound possible that a guitar can make. At the moment the biggest influence on the music in the show is Ennio Morricone for his epic western scores on classics like The Good, The Bad and The Ugly and A Fist Full of Dollars.

When discussing the music for the show, two questions came to mind. Firstly, how American can it be? E.g. Banjos and fiddles, like they use in Old Crow Medicine Show. And secondly, how British should we go? E.g. Guitars and violins, like in Nick Drake. The answer to both seems to have landed in knowing that we don’t want cheesy country or folk, but it’s still too early to write off those vibes.

However we go, for me it all starts with the guitar. Not only is it at the core of both American and British song writing, it also happens to be the instrument I compose with. So I went ahead and bought a few different guitar slides, researched some cool tunings and even bought a cello bow in an effort to make as many sounds as possible from the iconic ‘six string’.

I have an acoustic guitar which is great for playing transatlantic folk music and gives the tracks a really cool modal sound.

Next is an electric guitar with a cello bow, that when bowed slowly through lots of reverb and delay effects sounds really trippy and will be great for darker drones or bass layers. This is a really fun way to play the guitar and when using harmonics it can sound like horror film screeches. I can imagine this instrument being very useful in arrhythmic scenes to bring an ambiguous or haunting atmosphere.

Then there’s a baritone electric guitar which is essentially a lower pitched electric guitar that is often used on country and western productions. When played with a tremolo arm it can give an instant feeling of epic American weight and will be really useful for creating motifs and character themes.

And lastly is the lap steel, which sits right in front of me on its three legs. This instrument is played horizontally using a bottleneck or bullet slide. Its sound is so American that, when played in different styles, it can take you from Delta Blues to Nashville Country in a few notes. This will come in really handy when needing to inject some USA into what could be produced as a British folk song.

This is not the full instrumentation, as I am also recording backing tracks to accompany the performance that include harmonica, mandolin, orchestral drums, violin and piano. I might be juggling guitars throughout the performance but I can’t wait to get it up on its feet as it’s going to be a very fun show to play.

Catch Tom playing the score he has composed for South Western in performances from Tue 17 July. To find out more and book visit the main show page.