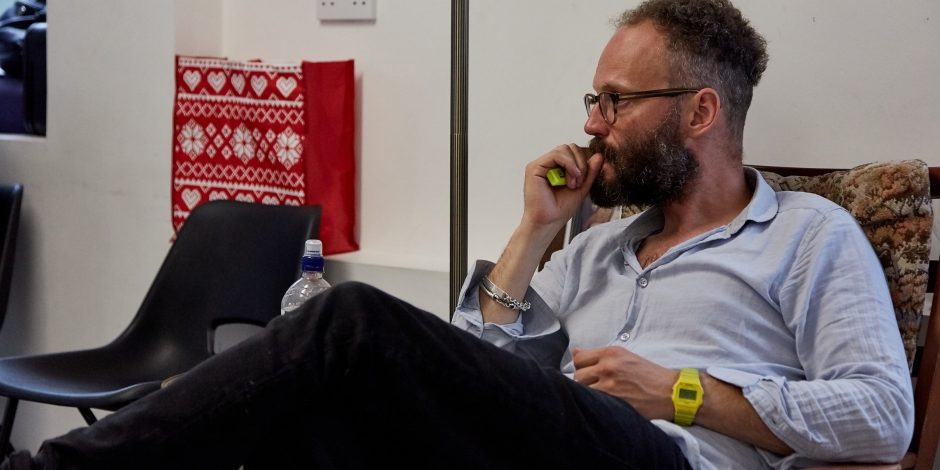 As we prepare for the opening of Blue Heart – our much anticipated co-production with the Orange Tree Theatre – the inimitable Alex Beckett, who plays Derek in Blue Kettle, muses on the trials and tribulations of the rehearsal period and some rather interesting accommodation…

I am currently sitting in rehearsal and therefore probably shouldn’t be writing this, but they are talking about a section that doesn’t really concern me so hopefully I won’t get into trouble. This also allows me time to munch on my croissant from Mark’s Bread just down the road from the theatre, which by the way is quite possibly one of THE greatest bakeries I, and everyone else in the company, have ever happened to stumble upon.

We have all been in Bristol for nearly two weeks now and everyone has settled into the swing of things and is exploring all the sights the city has to offer. My adventures have taken me further afield than the city centre, and this is largely thanks to where I am staying. In a field, literally. Yes, I thought it would be fun and different to camp for my time at Tobacco Factory Theatres. After the first two nights of little sleep and abnormally heavy dews that were as heavy as light drizzle, I was beginning to review my decision at committing to four weeks of camping.

However there have been no further dramas at base camp and instead I wake every morning to the noise of cows eating grass and other bovine digestion sounds…so what’s not to love?! I also raised my camping game over the weekend by investing in a much better tent than the fourteen quid sponge I was residing in last week. It has been a complete game changer and the remaining three weeks of camping now fill me with actual excitement instead of nervous anticipation. I say that, it is raining today, so we’ll see how it goes.

I suppose I should really talk about the play too. The latest is that we all seem to know our lines, which is good news, and we are approaching the stage of rehearsals where the whole show starts to be put together with costume, light and sound. Traditionally, a company enters this period of the process with confidence, however after about an hour of technical rehearsals almost everyone’s chutzpah has almost all but evaporated and there is always someone that completely loses the plot for about ten minutes. I have never been this person, but there is always a first time for everything.

Do come and see the show, it’s bonkers, brilliant and…erm…blue?!