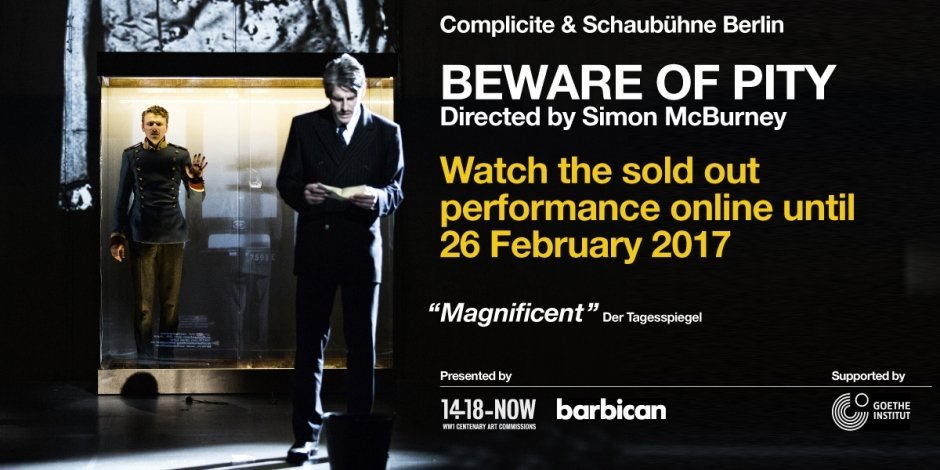 Beware of Pity is a Complicite and Schaubühne co-production adapted from the novel of the same name by Stefan Zweig. Directed by Simon McBurney and performed by the Schaubühne Berlin’s outstanding ensemble, the show tells the story of a young Austrian soldier just before the outbreak of the First World War.

The dates at the Barbican are the only UK dates for Beware of Pity and sold out. So grab this opportunity to watch this magnificent show without having to leave the comfort of your own home!

The live stream took place on Sun 12 February. It is free to watch and will be available to watch on demand until 11.59pm GMT on Sun 26 February.

All you need to do to live stream Complicite’s Beware of Pity is visit this page and play the film below, which you can enlarge in your screen or watch through YouTube by using the usual controls below.

Please note that the show is performed in German and will have English subtitles.

In general it is recommended that you watch the show with Chrome or Mozilla Firefox as your browser. Other browsers will work but Internet Explorer in particular could bring more issues to users.

There is also the first of a series of ‘in conversation’ films with Beware of Pity Director Simon McBurney and Schaubühne Artistic Director Thomas Ostermeier available below. Again, you can find the full series on the Complicite website or YouTube channel.

Simon McBurney directs the outstanding Schaubühne ensemble in a vivid account of a young man’s slide into a terrible situation, his struggle to extricate himself from it raising questions of consciousness and compassion.

Young officer Hofmiller commits a faux pas at a soirée held by a Baron, unwittingly asking his paralysed daughter to dance. The mistake pulls him into a relentless train of events in this devastating depiction of honour, love and betrayal, realised against the disintegration of the Austro-Hungarian Empire – a catalyst for the outbreak of the First World War.

Two of Europe’s most boundary-pushing, imaginative theatre companies work together at the Barbican for the first time. Their co-production is based on Stefan Zweig’s 1939 novel, written just before the Second World War but looking back to the verge of the previous disaster. Reverberating in the past and present, the story is relayed in German by seven actors, swapping narration and dialogue to vocally build the tension of McBurney’s orally rich, visually eloquent production.

Beware of Pity follows the five-star triumphs of The Encounter and The Forbidden Zone, the last shows presented at the Barbican by Complicite and the Schaubühne respectively.

Performed in German with English subtitles

The live stream is co-produced by Complicite and the Schaubühne and presented in partnership with Goethe-Institut London.

Founded in 1983, Complicite is an international theatre company based in London led by Artistic Director Simon McBurney (OBE) and Producer Judith Dimant (MBE). The company has won over fifty major theatre awards worldwide. Complicite’s recent work includes The Encounter, Lionboy, The Master and Margarita, Shun-kin and A Disappearing Number. Alongside its productions, Complicite runs an extensive Creative Learning programme with recent projects including Like Mother, Like Daughter and Tea. The Encounter was live streamed in March 2016 and seen by 67,500 people online.